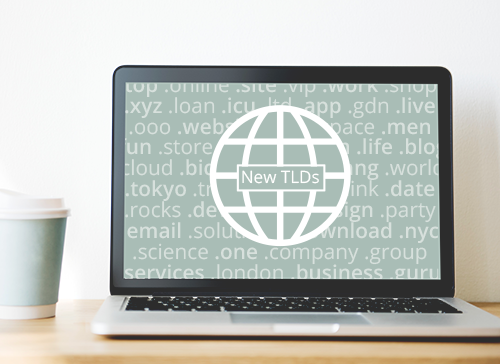 It’s been exactly 5 years since the debut of new generic top level domains (gTLD), so now’s a good time to step back and check out how the adoption is going, and where it’s heading.

The reason ICANN created these new domains was to open up and expand the Internet.. and make ICANN millions of dollars naturally. They claim in their original rollout video that these new gTLDs would give a voice to a billion more users.

In total, ICANN received nearly 2,000 applications (along with $60 million dollars in profit) before its deadline and set a goal of adding potentially 1,300 new TLDs.

Five years later and we are almost there with 1210 new gTLDs released. These can be broken up into 2 categories, branded usage like home.barclays, or general public usage like abc.xyz and docs.new, both Google properties. You may have stumbled across some .pizza’s, .wow’s, and .wine’s during this time, or maybe you even threw down $20 for your own .ninja domain.

Looking at the Numbers, Have the New TLDs Been a Success?

Thanks to ntldstats.com, you can see the progression of new TLD adoption from the beginning until now. Registration reached an apex of around 30 million in April 2017, before dropping a bit and settling in around 26 million today.

Now let’s compare these new domains to the already existing domains like .com, .net, etc. Here’s a chart of the most popular TLD’s worldwide as of November 2018, courtesy of Statista.

As you can see, there’s no new domains on the chart. The leading new domain, “.top”, accounts for just over 0.1% of global share.

Not even siphoning off 1% total global share in half a decade has to be a disappointment, even if the original domain extensions had a giant head start. This is a far cry from the billion more users ICANN predicted.

With so many new domains released in such a short time, scarcity was certainly not lacking in a suddenly crowded market. Add that to customer uncertainly around a non-dot com domain and you have slower than expected growth. Even if you tell people your new website is host.dime, they may still likely type in host.dime.com and get an error page. Another perceived problem is legitimacy. If a potential client sees you have a new gTLD or a dot com, they may think you are too small potatoes to get a dot com.

There is also a huge issue with spam. The sale of gTLDs provided a boon for global spamming and phishing operations as they could make a ton of domains, and as owners of their gTLD, there’s no one to stop them. Spam also pops up most on really cheap domains. A spammer buying thousands of spam sites would rather pay $1 than $10.

Spamhaus has put together their own badness index to show the most fraud heavy domains, and it’s not a shock to see that the most abused domains are from the new crop. 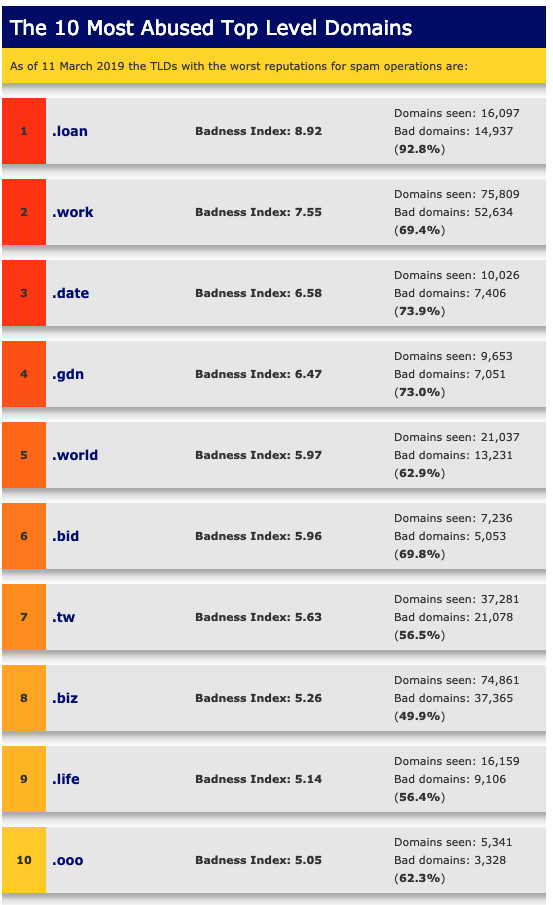 This spam can also be tangentially related to SEO. Google is on record saying that new TLDs have neither a negative or a positive effect on ranking. However, make sure you avoid a domain extension known for spam as you may be punished for the wrongdoings of others using the same extension.

There is some reason for optimism. According to domain name overseer Verisign, new TLD registration was up over 11% in 2018 compared to 2017, compared to an 3.5% registration increase across the board. This amounts to 1 in every 5 new domains in 2018 being a new TLD.

After a rocky liftoff, it appears new domains are finally finding seeing some adoption. Exotic domain endings are no longer as strange to the casual internet user as they used to be. It’s also fair to assume that as most of the common and small dot com domain names are taken, movement to these new domains are inevitable.

In Malcolm Gladwell’s book “The Tipping Point”, he describes the tipping point phenomenon as “the moment of critical mass, the threshold, the boiling point”. We spoke earlier that Google’s been dabbling in new domain redirections. In my opinion, small domains just look more clean and modern, and may begin to catch on. Once more large corporations go this route, I predict smaller companies will follow and we could see a tipping point that results in a massive jump in adoption.